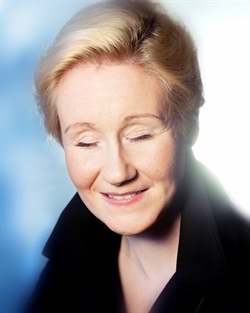 "There's no need for me to fake it, or even ham it up a bit - yes, unbelievably, both of these things still go on! I'm totally blind and that will be instantly recognizable and believable for audiences. But I'm also a very experienced actor, with over fifteen years in the business, so there are no risks for production companies either - it's a win win."

Highlights from Anna's acting career to date include:

With further exciting credits to come in 2020 - please check back soon.

Anna is a member of both Equity and Spotlight. Click here to view Anna's Spotlight profile. It includes detailed information on her acting and voice credits, as well as photos, voice clips and a showreel.

Anna has been working professionally as an actor since 2003. Commenting on her acting career to date, she says: "It has been - and continues to be - a surreal and exciting journey, working alongside, and learning a great deal from, some of the best in the business ... both actors and directors ... whilst creating moving and thought-provoking drama along the way. It's been amazing so far and it just keeps getting better."

Although not a formally trained actor, Anna's media experience began at the young age of nine, with the making of the RNIB video, Anna's Story. Filmed by The Moving Picture Company, this fourteen-minute documentary told a 'day in the life of' story of her experience of mainstream education and day-to-day life as a young blind person. Anna's input into media projects continued regularly throughout her school years, with numerous filming days for TV news programmes and documentaries, as well as magazine interviews and photo shoots.

After leaving school she initially began working as a voice artist, later embarking on modelling and acting - her career is always evolving and expanding. Anna has undertaken a wide range of training at The Actors Centre, London and has also received one-to-one tuition in singing and contemporary dance.

She is keen to be considered for all acting roles, irrespective of whether or not her disability is part of the casting brief.

Anna says: "I'm pleased to be able to say that things are finally beginning to change, but the progress and shift in attitudes remains quite slow. It's usually still the case that casting directors will only invite me in to meet them if they are specifically looking for a performer who is blind. I welcome these opportunities because I think it's vitally important that blindness is portrayed authentically in the media, and as a fully blind actor with fifteen years' plus experience in the business I'm in a great position to do just that. However, my disability does not always have to be central to a role - it can be far more incidental than that - so I'm keen to encourage casting directors to consider me for all roles and not just those where it says "blind" at the top of the casting brief. When that starts to happen on a regular basis, then I'll know we are making real progress."

If you are interested in meeting with Anna for a casting, or would like to ask her any questions about her work as an actor, please contact Anna here.